St Mary’s Star of the Sea Catholic Primary School Hurstville works in partnership with the Parish of St Michael’s. It is a two-stream school with over 400 students. Our parish community is led by our Priest in Charge, Rev. Dr Janusz Bieniek, CSMA.

As a Catholic school we are committed to the development of the whole person. As a partner in Catholic education we commit ourselves to our students by:

With a school motto of ‘Where there is love there is Christ’, we take Jesus as a model for everything we do.

We aspire to excellence in education through programs that are designed to meet the needs of the individual student. We strive to raise the academic bar for all children through exciting and innovative teaching and learning.

Together the teachers, parents and children continue to build a community that can truly be the face of Christ in the Hurstville area. 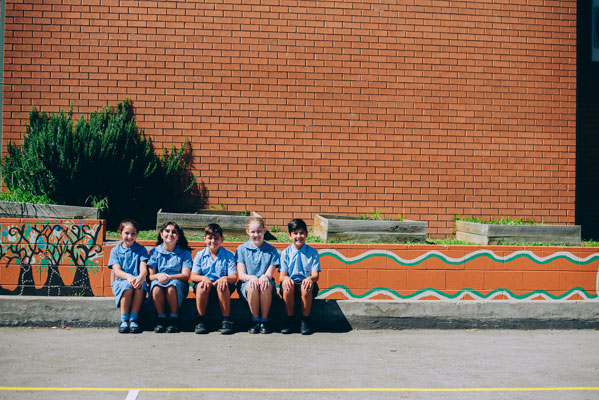 Our History and Charism

It was located in the old church on Forest Road where the new Bethany Hall now stands. In the 1890s another school, St Mary’s Star of the Sea School, which was housed in the rooms in the long wing of the old convent (now administration block of Bethany College) was established. As well as the traditional subjects of English and Math, the Sisters introduced Music and Art to the school curriculum.

The fees from this school supported the Sister in their educational work which also took them to Rockdale, Penshurst and Kogarah.

In the 1920s St Michael’s and St Mary’s Star of the Sea schools were amalgamated under one administration. This was changed in the late 1960s and a separate administration was introduced for the Primary and Secondary sections of the school. The Primary School continues to bear the name St Mary’s Star of the Sea while the Secondary school was amalgamated in 1993 to form Bethany College.

The Sisters of Charity

The Sisters of Charity were involved in education at Hurstville from 1886 until 1999. The Sisters were the first religious congregation to come to Australia in 1838 and their ministry has been very extensive. They established the well-known St Vincent’s Hospitals, hospices, education and social work centres.

In the year 2000, St Mary’s Star of the Sea came under the leadership of lay administration but will continue to be motivated by the Charity Sisters motto – ‘Caritas Christi Urget Nos’ – The Love of Christ Urges Us On” (Where There is Love there is Christ).

Our Vision and Mission

We foster a love for learning through a contemporary, dynamic, creative and challenging curriculum, where we, as a Catholic community, live out our motto, “Where there is love there is Christ”.

Inspired by the love of Christ, our Catholic faith and the life of Mary we educate the whole child in partnership with parents and Parish to create a community that nurtures, respects and affirms.

St Mary’s Star of the Sea Primary Catholic School Hurstville includes the wider community in its day-to-day activities. The link between the school and parish is particularly strong. The school works in partnership with the St Vincent de Paul Society, Sisters of Charity and other charities.

At St Mary’s Star of the Sea, we have a strong partnership with our parish, St Michael’s.

Proudly Part of the Community of Sydney Catholic Schools

Our school is part of a system of over 150 low-fee Catholic schools in the Sydney Archdiocese.

Sydney Catholic Schools are thriving Catholic communities that ignite a love of Christ through excellent teaching and learning to empower students to reach their full potential.